This week we paid a visit to St Leonards Farm, which is situated in the picturesque village of Esholt, near Leeds. Accompanying us was my good Friend Caroline.

I had stumbled across the farm’s website when looking for day out ideas. It’s actually not very far from us but I had not heard about it before!

Once parked up, we paid our entry fee (A very reasonable £4.95 for adults and £1.95 for Children under two years, which included the Farm visit and the soft play) We then went inside the lovely grounds.

Further information regarding the farm can be found HERE

After feeding Willow and a having a quick coffee in the tea room, we headed into the ‘Farmer James’s Fun Barn’ which essentially is a huge barn full of soft play.

Gabriel had a wonderful time. They have a special ‘under fours’ area, with a big red slide. Gabriel loves slides at the moment and spent most of his time with Caroline (I forgot my socks..) climbing up the ladder and going down the slide. He did this mostly all by himself, I was so proud of him! 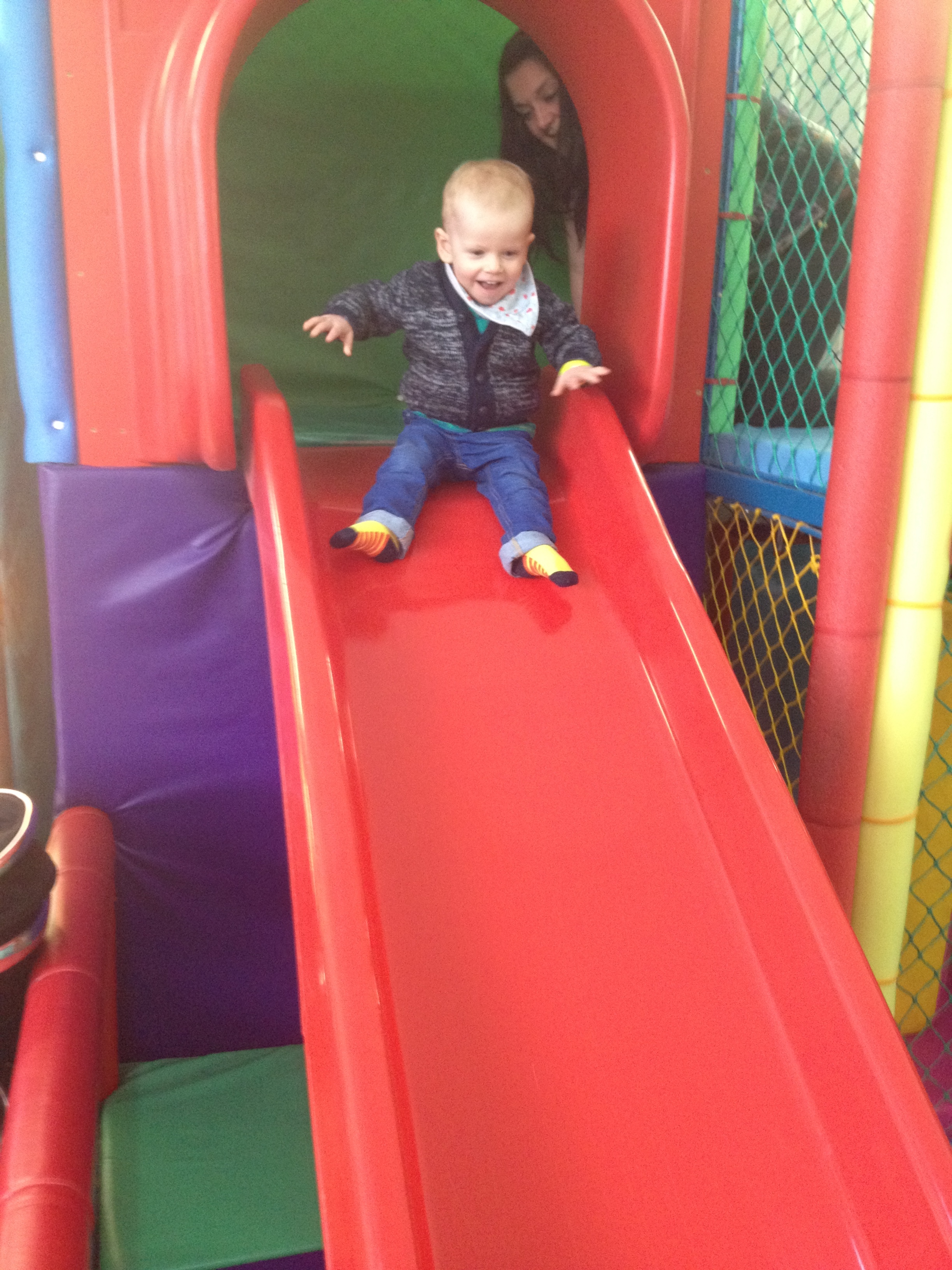 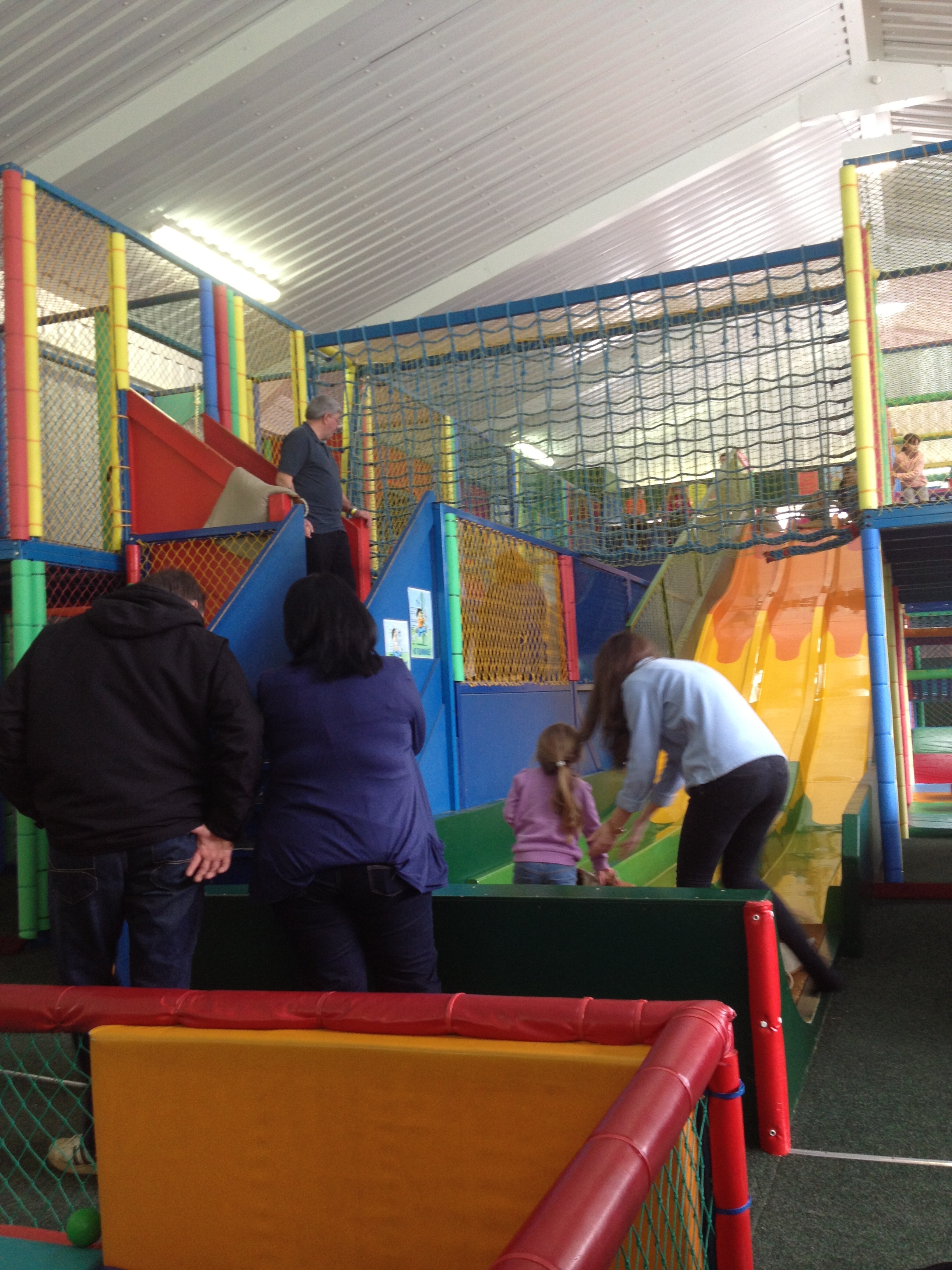 Normally I hate soft play centres, they are often so noisy and hectic. But this was different. It wasn’t too busy and had quite a nice atmosphere too. For older Children there are some amazing looking ‘death slides’!

Then we went outside to look at the farm animals. First we came across the goats, sheep and lambs. We had bought several bags of animal feed so that Gabriel could have a go at feeding the animals. We have been to a farm before, but it was last Summer and Gabriel was not yet walking, so it was lovely to watch him being so involved.

First we fed the sheep and goats. Caroline led the way, and we found a very accommodating sheep that was more than happy to take our food! Gabriel was apprehensive at first, but with some gentle persuasion from Caroline and I, he had a go at feeding them. He mainly threw the food, but he got the general idea! With each handful his confidence grew, which was lovely to see. 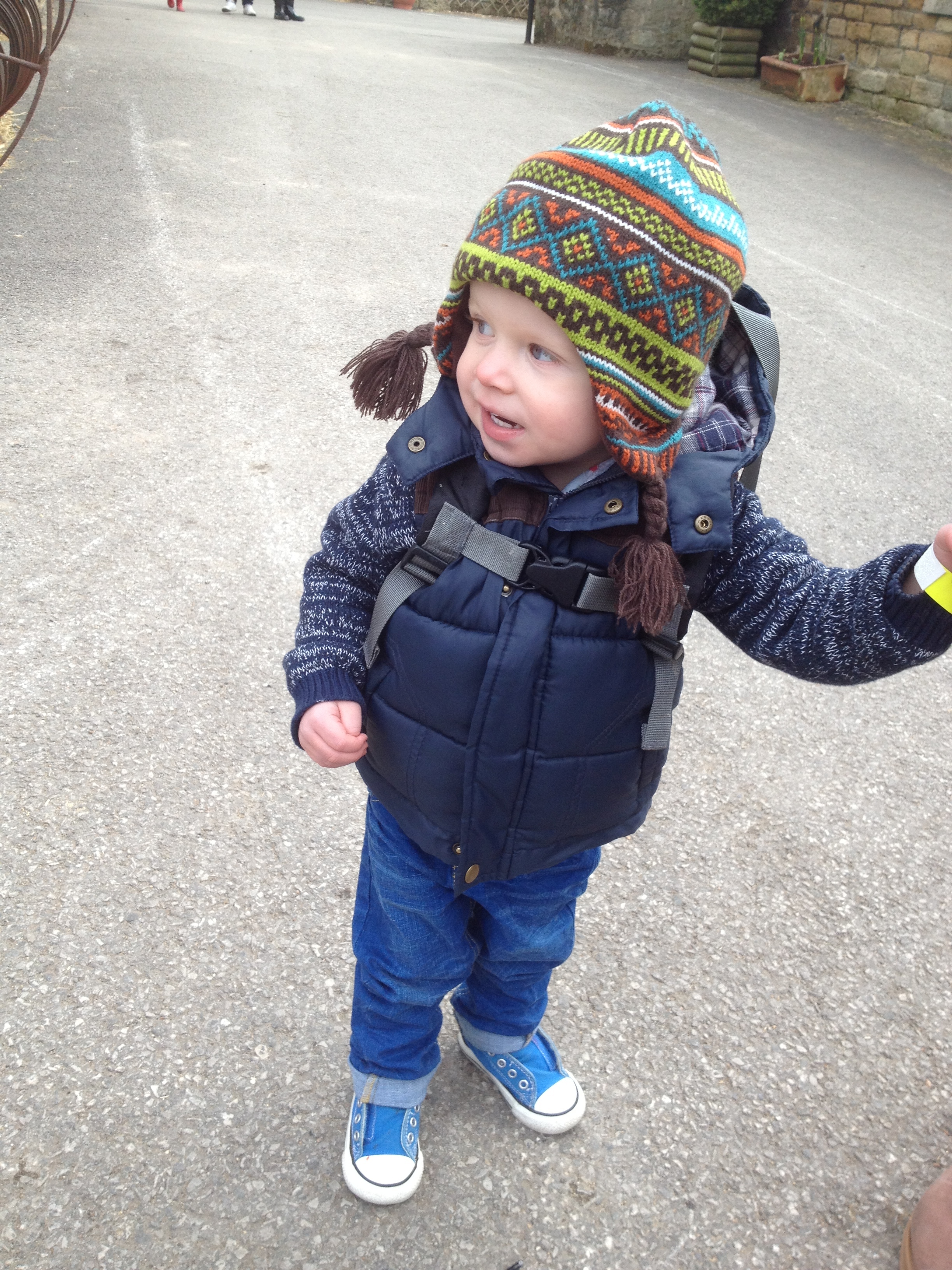 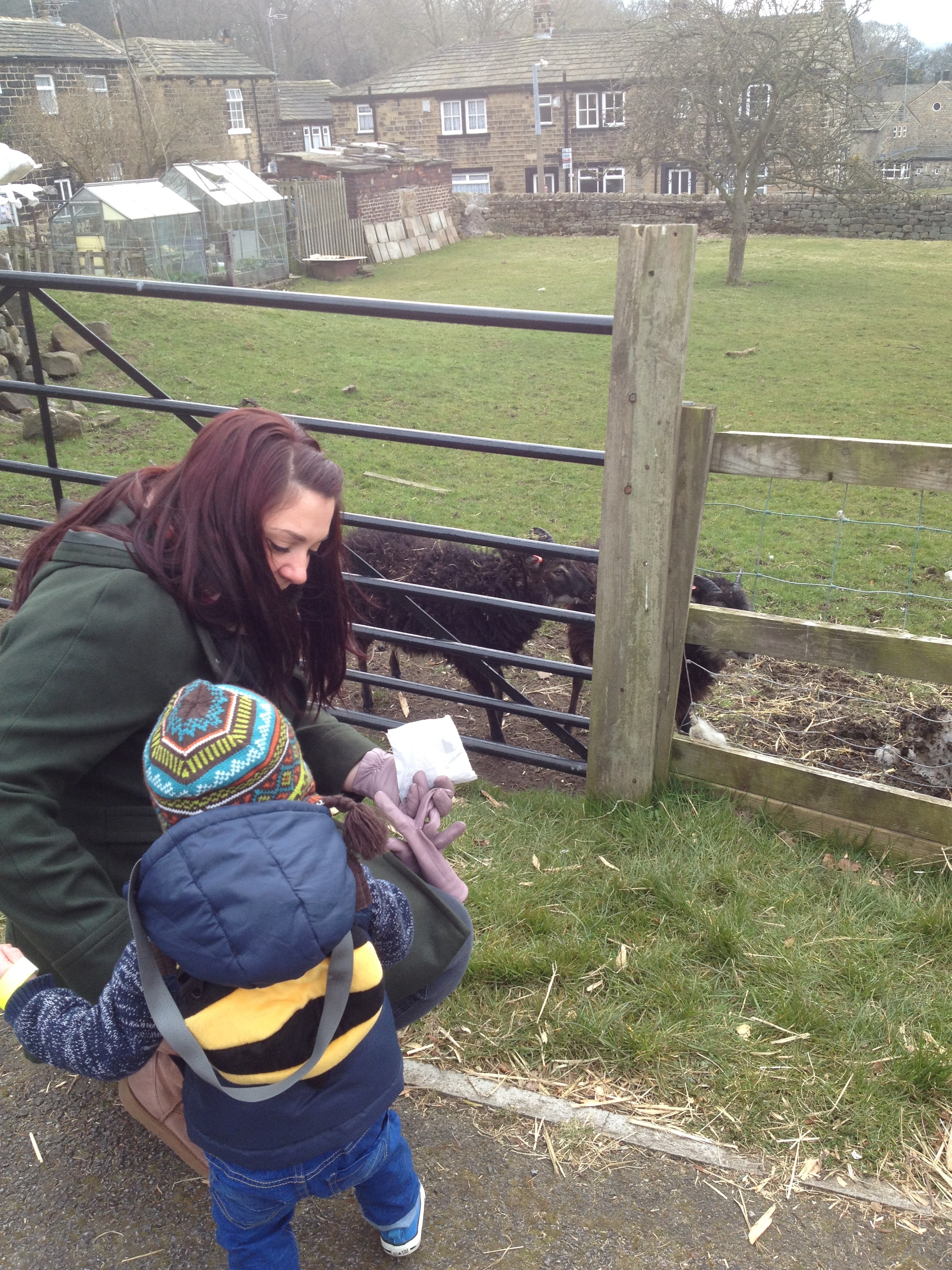 The sheep had several beautiful lambs, I couldn’t resist taking some photos! 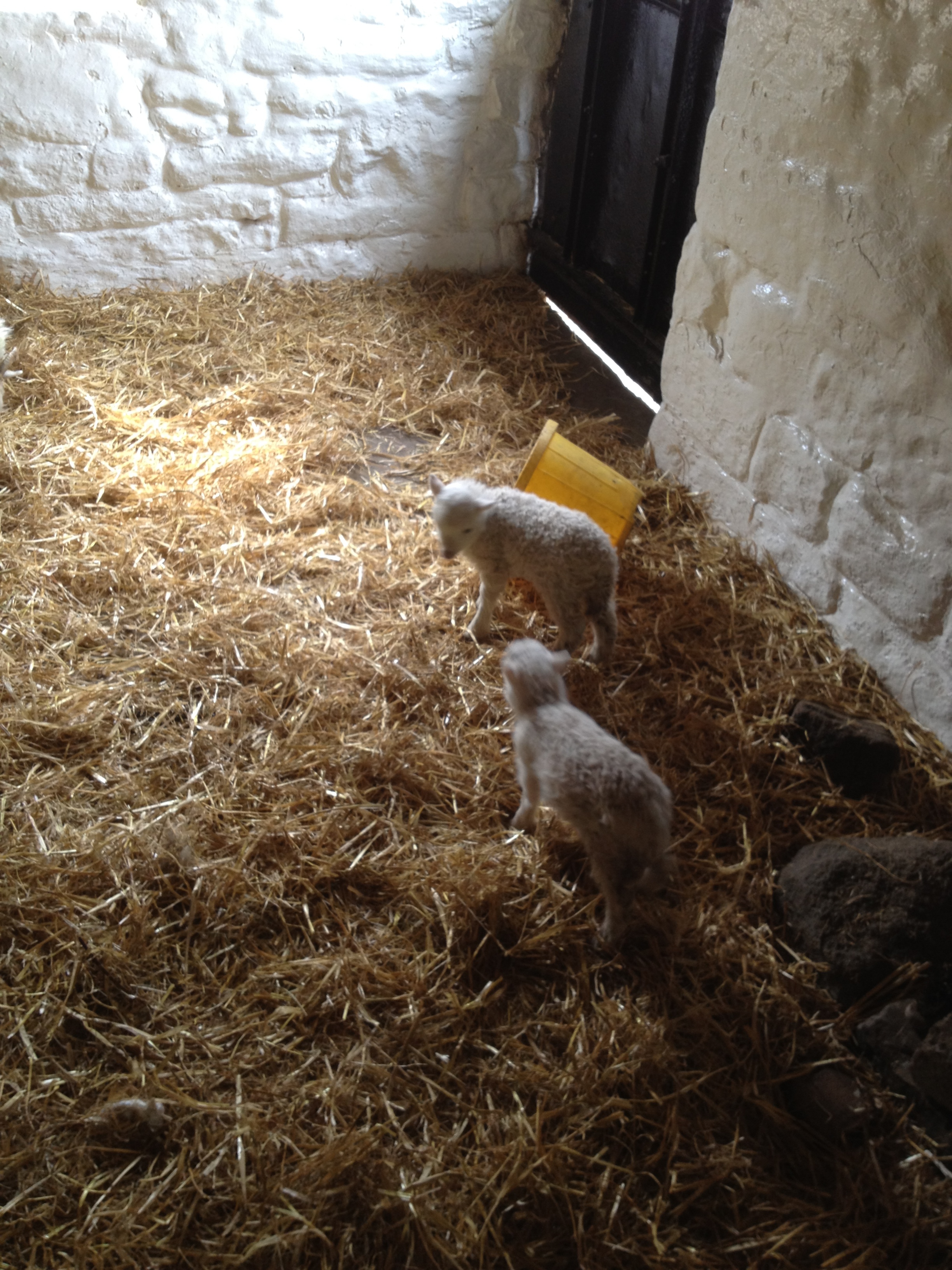 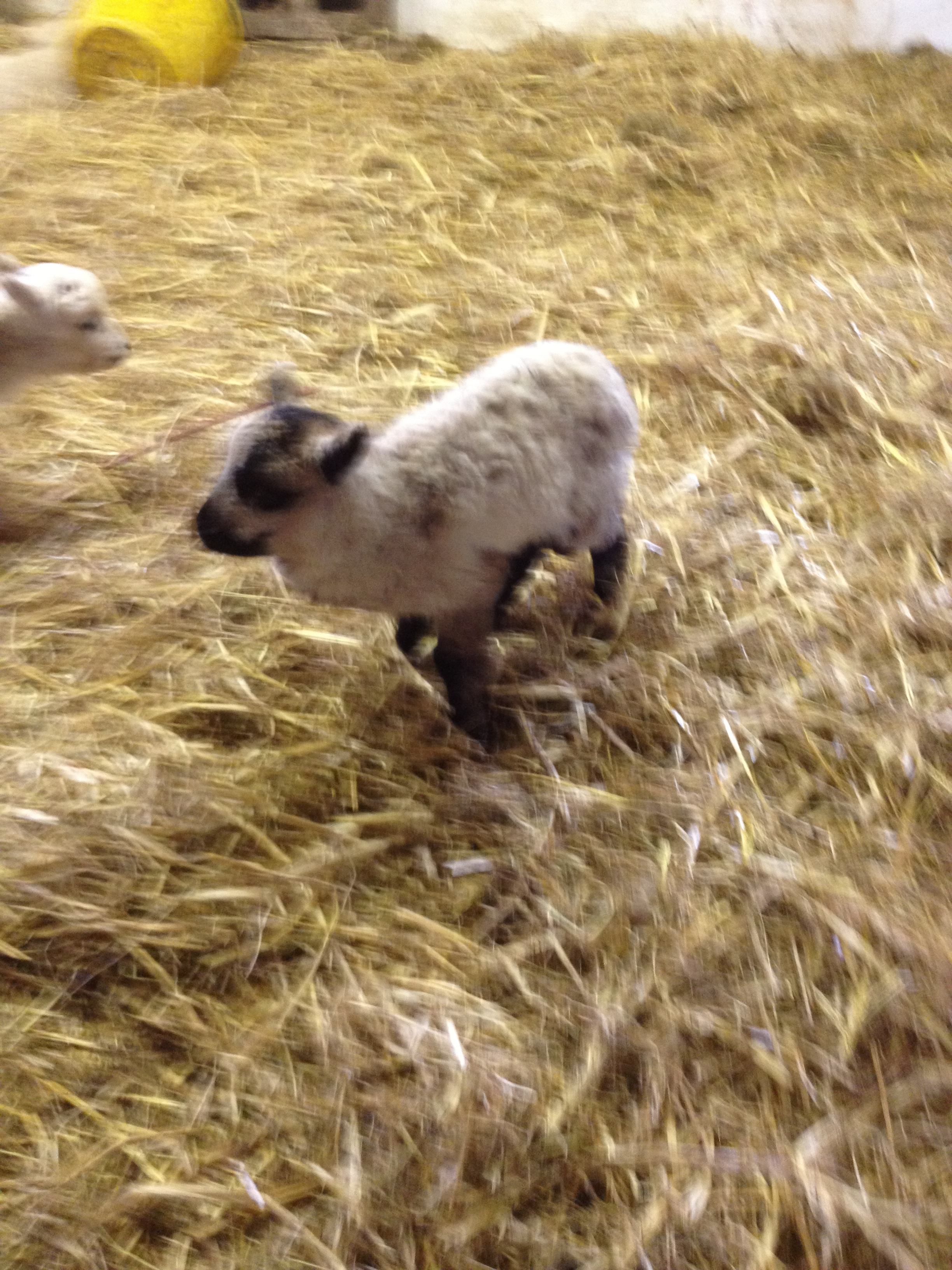 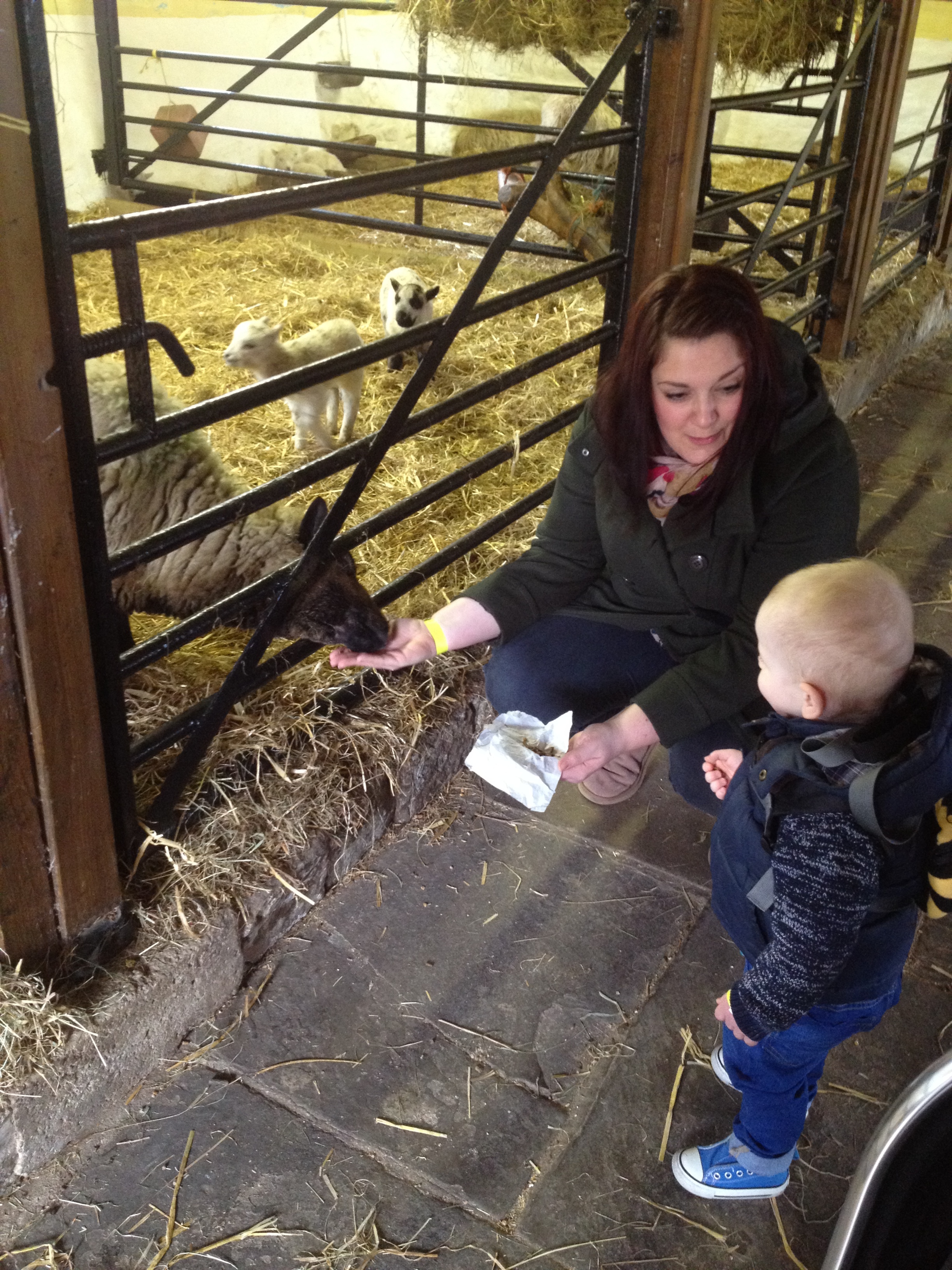 Caroline fed one of the other sheep whilst I took some photos and he left rather a disgusting brown saliva deposit on her hand!
It was time to go find some other animals..

Next we visited the chickens. They were slighty more upbeat than the sheep, and fought each other to get the food!
Caroline and Gabriel set about throwing their food into the coup and we watched then chase each other squawking, trying to grab every single scrap! 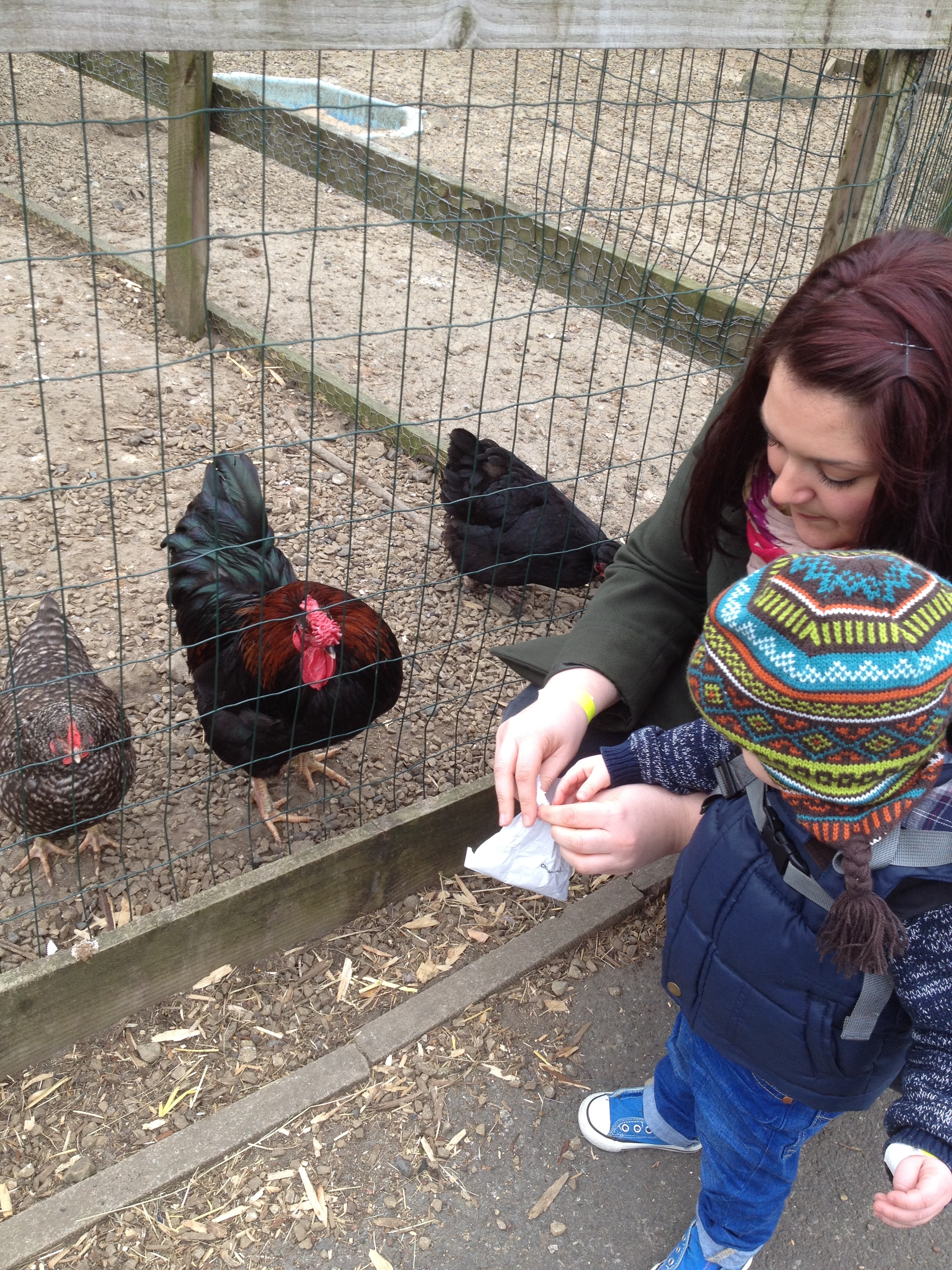 We followed the enclosure round and located the ‘small animals’ area. Here are housed the rabbits, ferrets and guinea pigs. It’s also the ‘petting area’ where you can hold some of the animals. Gabriel has never held an animal before (we have fish as pets!) so we selected a bunny for him to stroke and hold. He was very wary, but did well. He stroked the bunny and although I would not say he was overjoyed with it, seemed reasonably happy with it near him! 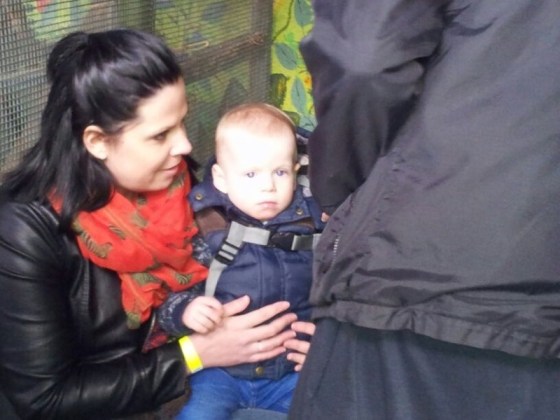 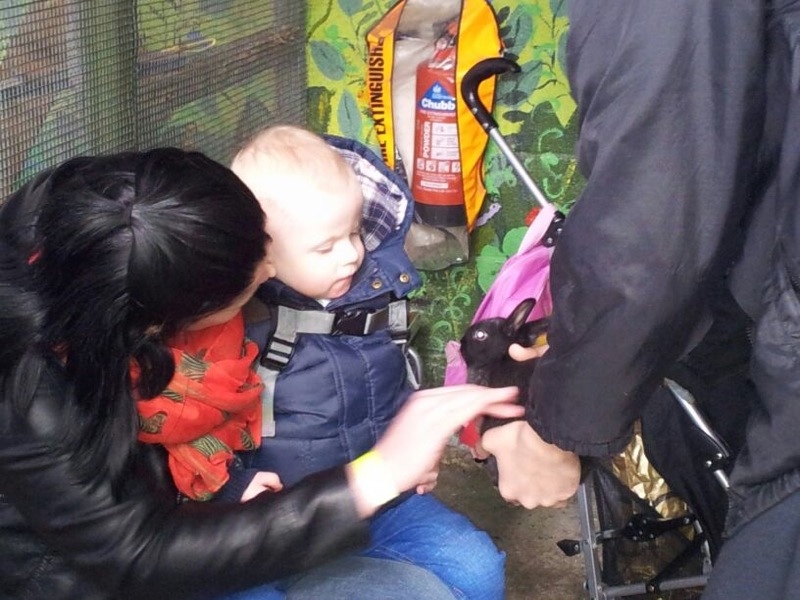 We then looked at the ponies and horses before going on a small mission to locate the donkeys. Caroline loves donkeys! Because, she tells me she remembers that her Grandad who lived in Italy had one living in his garden!

So, after walking the whole length of the farmland, viewing the other sheep and being followed some very strange ostrich-type birds we found two most adorable miniature donkeys and immediately tried to feed them both!

One of them was extremely cunning, it kept pushing the other back so it wasn’t able to get to the food we had given them! We hatched a plan, we hated to see such injustice! Caroline sneakily distracted him with a little food whilst I gave the contents of the bag to the other, ta-dah! Two satisfied miniature donkeys! We went on our way. 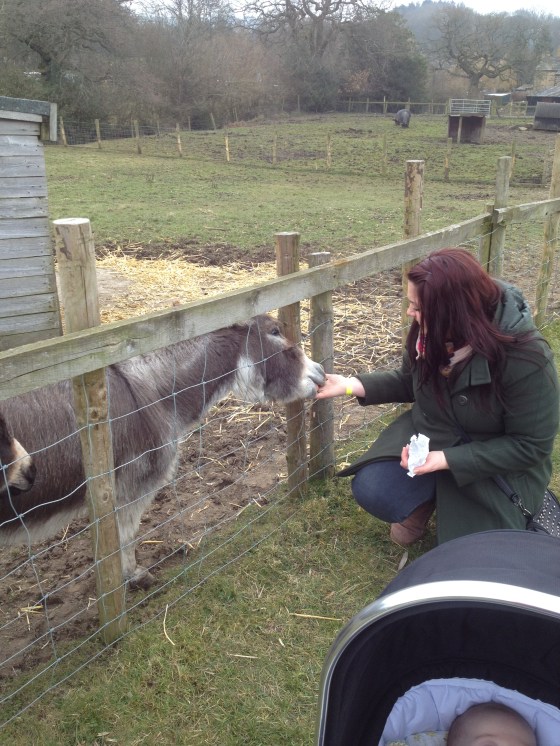 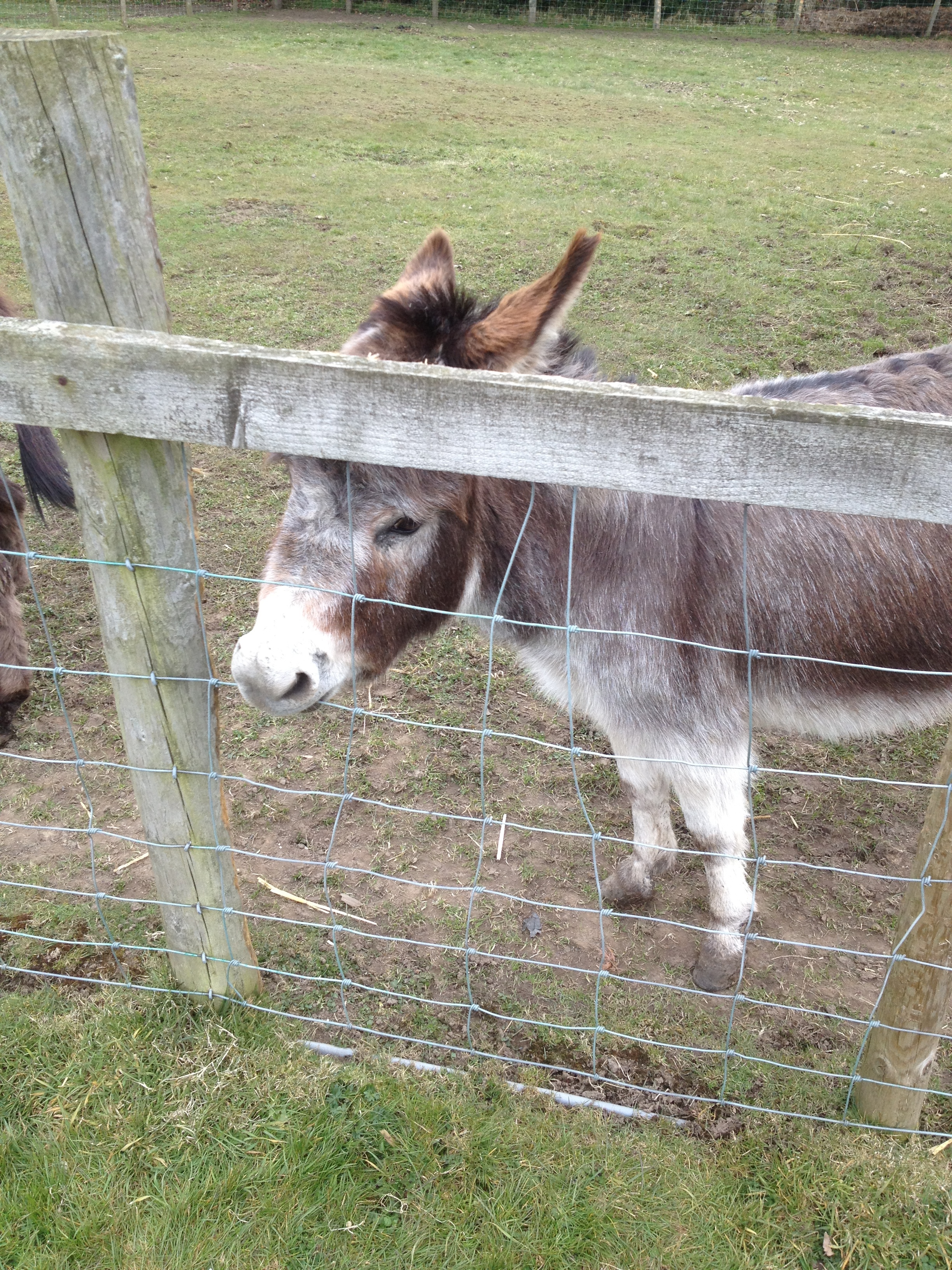 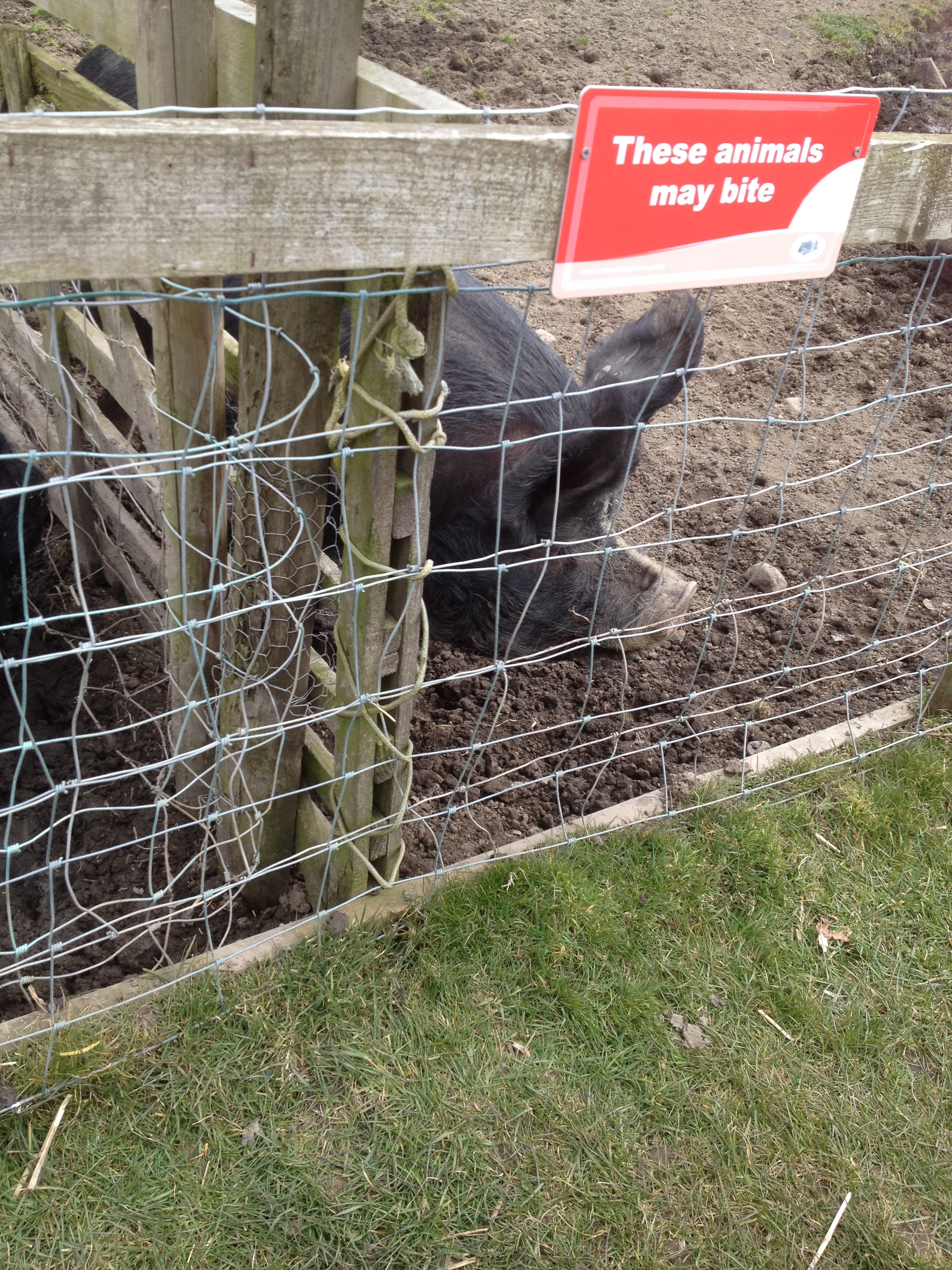 At the moment one of Gabriel’s favourite television shows is Peppa Pig, so I was rather excited about seeing his reaction to the pig enclosure. They didn’t look too like Peppa or George though- they were EXTREMELY muddy and were laid about sleeping! Still, Gabriel was very excited. I asked him what noise Peppa makes, he made a grunt! Oh how I love it when he does that, it’s so cute.

I saved the best until last, the meerkats. Now, I’ll be honest I have never quite understood all the fuss about Aleksandr and Sergei etc. But maybe now I do. These meerkats were amazing. They posed for photos, very proud of themselves and they seemed so happy! They were great. Gabriel loved them, and I did too. Caroline managed to take a great photo of one of them. 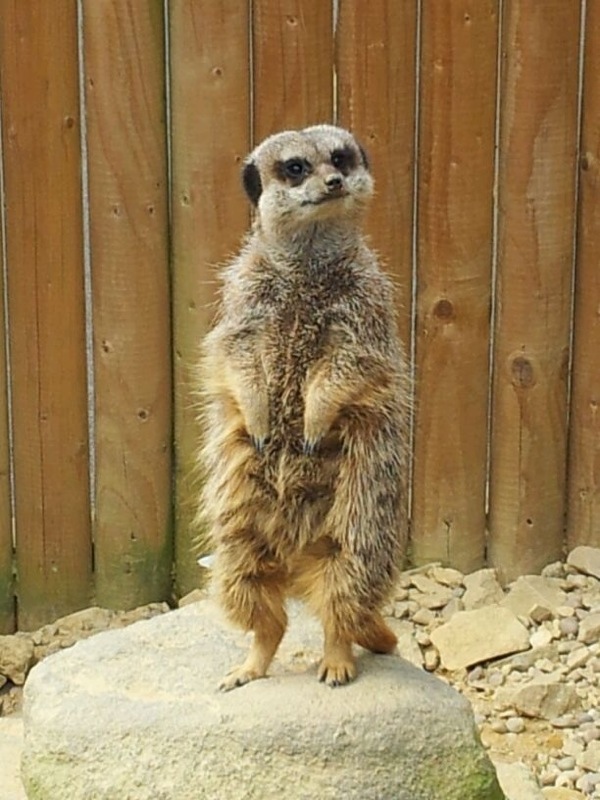 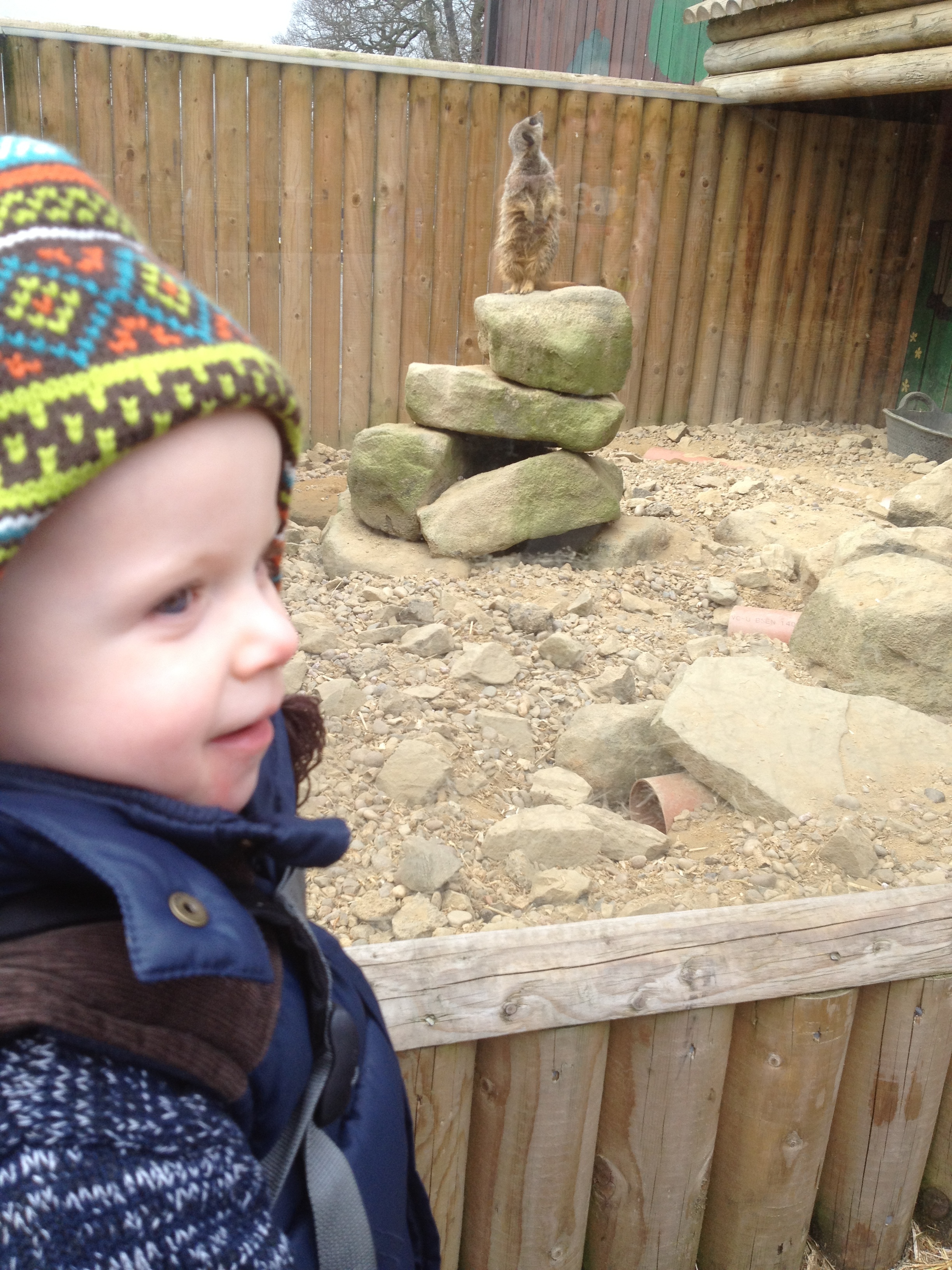 We were almost done, there was just enough time to have some photographs on Farmer James’s tractor and have a few rides on the toddler trikes in one of the outdoor play areas. 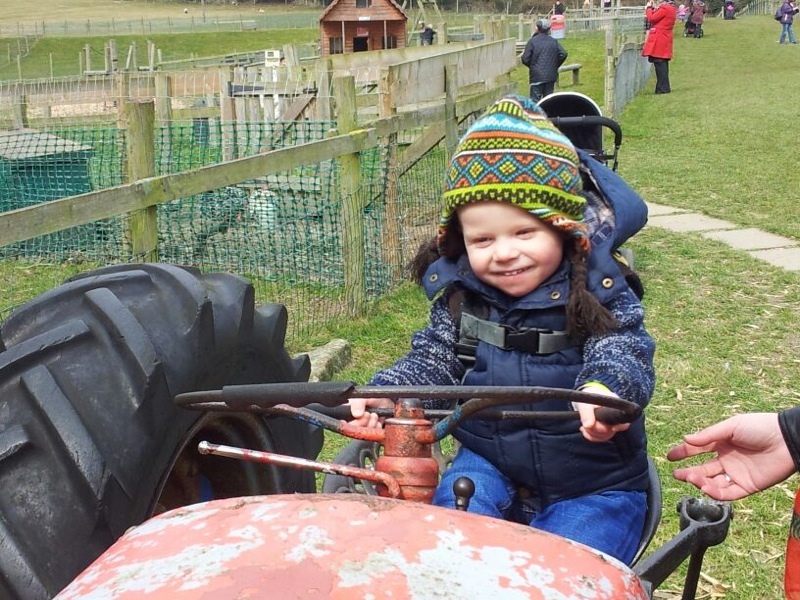 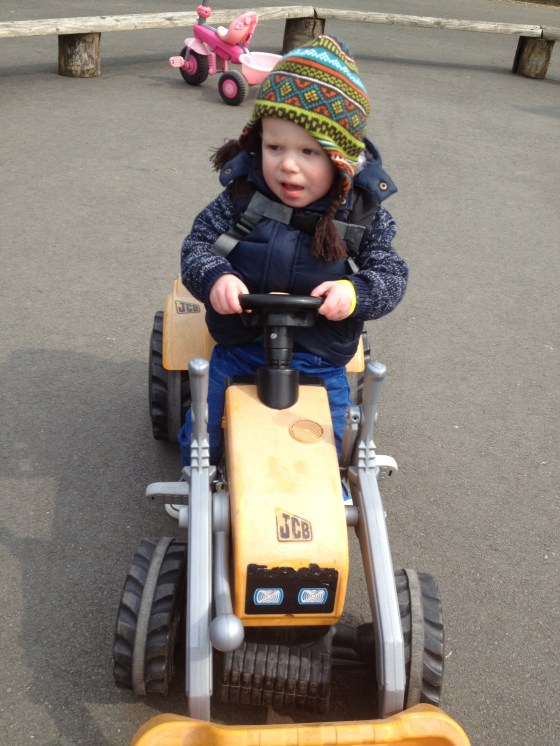 Sadly it was a little too cold to play outside for too long, but we will most definitely be returning this Summer. Unfortunately as from the 8th September 2013 there will be no general admission to the farm due to retirement. However, the fun barn will remain open and School trips will still take place.

For older Children there are also several outdoor play areas, including one with an impressive looking zip wire, two straw play barns and tractor rides.

Absolutely recommend this place for a visit, whatever your Childs age, they will love it!